More than 177,000 feet of conduit and nearly 950,000 feet of wire and cable went into this cutting-edge academic facility. 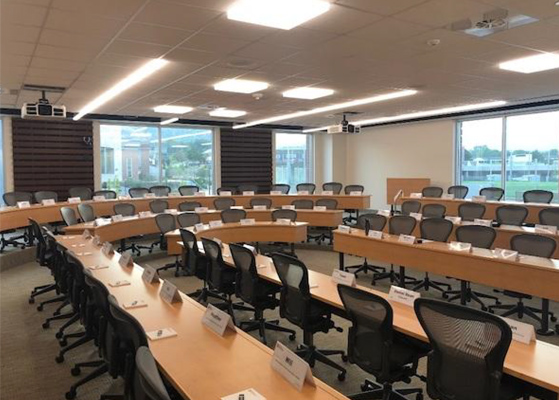 Wasatch Electric provided electrical construction and power distribution services for this new academic facility on the University of Utah’s campus.

The project featured a large scope of work, involving a wide variety of trades, on a tight schedule. We coordinated closely with other contractors throughout the project to help keep work progressing smoothly without unnecessary delays or conflicts.

Additionally, because the new building was being constructed in an existing campus environment, the project was confronted with limited material and equipment staging areas. Site work was further complicated by steep slopes between the existing buildings, which had to be managed with terracing.

Ultimately, thanks to our team’s diligent efforts, the project was successfully completed on-time and to the client’s high standards of quality.

The client required a new, state-of-the-art academic facility that could house their Master of Business Administration programs, center for executive education, business career services center, economics institute, and other programs associated with their business school.

During the project, we provided:

Across the 150,000-square-foot four-story facility, we worked in a variety of environments, including large conference and meeting rooms, an auditorium, a professor’s lounge, a cafe, and twelve 80-seat classrooms.

The University of Utah is a public research university serving more than 32,000 undergraduate and graduate students.